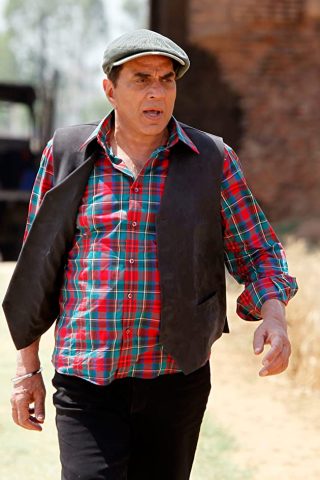 He is known as ‘Garam’ Dharam in Bollywood. Had the looks of a real gentle man, masculine body of a he-man and when it came to his films, he had a very humorous touch in his dialog-delivery and the timing.

Dharmendra’s original name is Dharam Singh Deol. He was born in a Jat Sikh family in Phagwara in Kapurthala district in the Indian state of Punjab to Kewal Kishan Singh Deol and Satwant Kaur. He spent his early life in village Sahnewal and studied at Government Senior Secondary School at Lalton Kalan, Ludhiana. He did his intermediate from Ramgarhia College, Phagwara in 1952.

The heroics in his films – Phool Aur Patthar (1966), Jugnu (1973), Raja Jani (1972) and Loafer (1973) – are all quite remarkable and unforgettable. He got nominated for Filmfare best actor 4 times in his career though he couldn’t get one but got “The Life Time Achievement” award in 1997 from Filmfare for his achievements, splendid performance during his times and wonderful career in Bollywood. Dharmendra was fond of movies from a young age. He participated in the Filmfare new talent contest, which he won and came to Mumbai from Punjab looking for work. He made his debut with Arjun Hingorani’s Dil Bhi Tera Hum Bhi Tere (1960). After which he got supporting roles in the film Boy Friend (1961) and was cast as the romantic interest in several woman oriented films from 1960-1967, where the story revolved around the heroine’s character and, he was usually cast as a romantic hero opposite senior established leading actress of the time and later, from 1974 on-wards, as an action hero. His major breakthrough was playing supporting role to hero Rajendra Kumar in Aaye Milan Ki Bela, where his character was negative and supporting role in patriotic film Haqeeqat (1964) and playing romantic interest in woman oriented films from 1960-1967 and playing supporting roles to Balraj Sahni, Ashok Kumar, Biswajit in some films from 1960-67 like Soorat Aur Seerat, Bandini, Mamta, Ghar Ka Chirag.His sensitive side was explored by Hrishikesh Mukherjee in Anupama (1966) and Satyakam (1969), the latter is considered one of the best performances of his career. He got solo hero stardom with the blockbuster, Phool Aur Patthar (1966), which was his first action film but he became established action hero from 1971 film Mera Gaon Mera Desh. He projected himself as romantic hero with films like Pyar Hi Pyar, Aaya Sawan Jhoom Ke, Mere Humdum Mere Dost and Aaye Din Bahar Ke. He cemented his image as action hero with successful films like Seeta Aur Geeta (1972), Raja Jani (1972), Jugnu (1973), Kahani Kismat Ki and Yaadon Ki Baarat (1973). Dharmendra formed a popular onscreen pair with Hema Malini who later became his second wife. Hema Malini was the biggest female star of 1970s and they went on to star in hits such as Tum Haseen Mein Jawan, Sharafat (1970), Seeta Aur Geeta (1972), Raja Jani (1972), Jugnu (1973), Pratiggya (1975), Sholay (1975), Charas (1976), Azaad(1977), Dillagi (1978), among many others. Dharmendra proved his versatility and comic timing through Pratiggya, Chupke Chupke and Sholay. In Ramesh Sippy’s Sholay (1975) he shared screen space with Amitabh Bachchan, Sanjeev Kumar and Amjad Khan and is still remembered for his inimitable portrayal of Veeru. His best romantic pairing was with the actress Asha Parekh with whom he had 5 hits – Shikhar, Aaya Sawan Jhoom Ke, Aaye Din Bahar Ke, Samadhi and Mera Gaon Mera Desh. His next best pairing was with Hema Malini, with whom he did 35 films of them 31 had them as a leading romantic pair and Dharam Hema had 20 hits and 15 flops. Dharm Hema married in 1980 and Dharm-Hema have 2 children together, Esha and Ahana and he has two sons, Sunny Deol and Bobby Deol from previous marriage with Prakash Kaur.

Often in 1960’s till 1971 he played the romantic lead opposite female leading ladies in woman oriented films where the female protagonist’s role overshadowed his roles with Dharam playing only supporting role in these films opposite Meena Kumari, Nutan, Mala Sinha, Sharmila Tagore. Phool Aur Paththar was the turning point in his career and established him as an action hero and as a solo lead hero.Artistically and popularity wise his peak period was the 1971-1979 where he did multi star as well as solo hero films in action and comedy genres and when his performances was appreciated by critics as well as audiences. Critics panned every film he did from 1985-2002 with exception being critically acclaimed films Burning Train, Ali Baba Aur 40 Chor, Jhutha Sach, Dharm Aur Qanoon, Rajput and Ghulami. He was the 2nd highest paid actor along with Vinod Khanna in Hindi films from 1976-1982 and Dharam alone was 3rd highest paid Hindi actor from 1987-1993 of A grade Hindi Films.

In the early 70s, Dharmendra became the first Indian actor to be voted among the most handsome men in the world. Through the 70s and 80s, Dharmendra worked with some of the biggest names in B’town such as Bimal Roy, Yash Chopra, Raj Khosla, Ramesh Sippy, Rajkumar Santoshi, Hrishikesh Mukherjee and Basu Chatterji. In 1983, Dharmendra diversified into production and launched his elder son Sunny in ‘Betaab’, which was produced by his banner Vijayta Films and was a huge hit. in 1990, he produced Ghayal starring Sunny Deol in lead. The film was the second biggest hit of the year and won 7 Filmfare Awards including Best Film award and the coveted National Film Award for Best Popular Film Providing Wholesome Entertainment. He would later go on to launch the successful careers of his younger son Bobby in ‘Barsaat'(1995) and nephew Abhay Deol in ‘Socha Na Tha'(2005) under the banner. He has also periodically made films in his native tongue of Punjabi, starring in Kankan De Ole (Special Appearance) (1970 ), Do Sher (1974), Dukh Bhanjan Tera Naam (1974), Teri Meri Ik Jindri (1975), Putt Jattan De (1982) and Qurbani Jatt Di (1990).

The low brow action films directed by likes of Kanti Shah damaged his action career in late 90s. Dharmendra was nominated 4 times for Best Actor Award at Filmfare Awards but never won. He was honored with Lifetime Achievement Award by Filmfare in 1997. He made a comeback to A grade films with a role in Pyar Kiya Toh Darna Kya (1998). He joined politics and was elected as a Member of the Parliament in the 2004 general elections, from Bikaner in Rajasthan, on a Bharatiya Janata Party ticket. He returned to acting in 2007 with films Life in a… Metro and Apne were acclaimed and successful. In the latter, he appears with both his sons, Sunny and Bobby for the first time. His other release was Johnny Gaddaar, where he played a villainous role. In 2011, he starred alongside his sons again in Yamla Pagla Deewana released on 14 January 2011 and was a success. A sequel Yamla Pagla Deewana 2 was released in 2013. His also acted with his daughter Esha in his wife Hema Malini’s directorial venture Tell Me O Khuda in 2011. In 2011, Dharmendra replaced Sajid Khan as the male judge of the third series of popular reality show India’s Got Talent. Dharmendra’s first marriage was to Prakash Kaur at the age of 19 in 1954. From his first marriage, he has two sons, Sunny Deol and Bobby Deol both successful actors, and two daughters,Vijeeta Deol and Ajeeta Deol. He has 4 grand sons named Karan, Rajvir, Aryaman, and Dharam. Dharmendra fell in love with Hema Malini during the filming of Sholay. She eventually married him in 1980. As the Hindu Marriage Act forbade polygamy, he converted to Islam in 1979 to avoid protests and give legitimacy to his second marriage. The couple has two daughters, Esha Deol and Ahana Deol. Esha is an actress and Ahana is a dancer. Dharmendra has received several honors for his contribution to cinema and was awarded India’s third highest civilian honor Padma Bhushan by the Government of India in 2012. 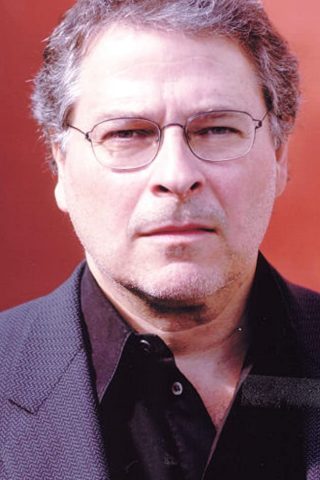 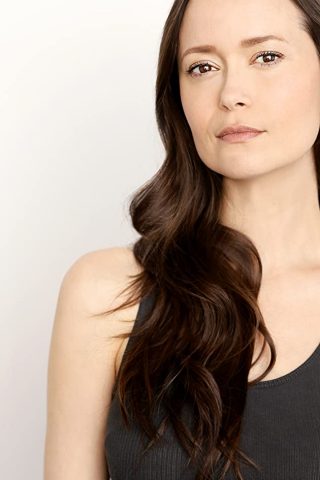 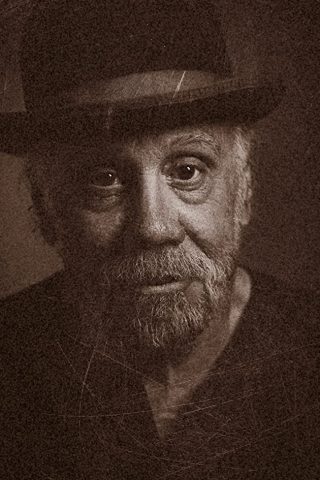 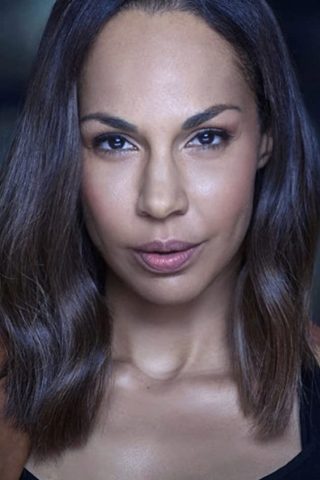